It is 1941. Lad has been back from Venezuela for about 5 months and Dan has just returned from Alaska. They are both working for the Producto Manufacturing Company in Bridgeport and hoping they won’t get drafted, but the war is moving closer each day.

I almost missed out on my weekly letter to you as this has been an unusually busy day. Aunt Elsie came up last night in honor of Aunt Betty’s birthday, and because she had to get back to New York early to trim the window, she had to leave in time to catch the 10:20 train this morning. As Lad was still asleep and Dan has no driving license, it was up to me to drive her to the station along with getting Aunt Betty fixed up, lighting her stove, etc., getting her breakfast, getting Elsie’s breakfast, starting dinner and so on. Then, because Mrs. Warden was coming home from the hospital today with her new baby, I invited Paul and his wife in to dinner. The doctor yesterday had told Aunt Betty she could come down to dinner today, so we had to get the dining room heated up. Dave helped me with this after coming home from church while Dan did some work around the yard. While we were at dinner, Bruce Lee, his two sisters from Maryland (one of them Jack’s mother, Dick,) Jack’s father, their two young daughters and Pat all breezed in. This resulted in questions about Alaska and Venezuela developing quite naturally into showing of motion pictures, souvenirs, etc., during which Don Whitney, Barbara, Chet, Jean Hughes, Babe and Red dropped in. Then it was necessary to get the three Westport girls some supper, as Bruce and his party of older ones left for dinner waiting them in Westport, but the girls stayed on to see the finish of the movies. Then I had to get Aunt Betty back upstairs, get her supper. I have left Dave to act as host to the three girls while the rest of the gang are upstairs visiting with Aunt Betty and I sneaked off to do this. 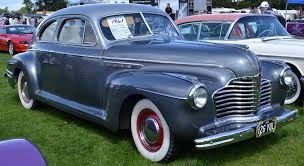 This photo of a 1941 Buick Special – dark blue –  is from the following URL – https://www.google.com/search?q=1941+buick+special&safe=active&biw=1388&bih=668&tbm=isch&tbo=u&source=univ&sa=X&ei=JLmDVPbRDIypyASO6oKgCA&ved=0CDQQsAQ

The big news this week is that on Wednesday Lad bought a car. It is a twin of mine, same make, year, model, except that it is dark blue. I arranged a loan for him at the North End Bank, which, together with some $200 that Dan loaned him, made up the purchase price of $900, which, incidentally, is also the price I paid for my car. His car has more mileage on it than mine, but he says mine has more pep; in fact, Lad says my car is the peppiest car he has ever driven.

Dan, as he probably informed you, is working at the same place as Lad — the Producto Machine Co., only on different work. He seems to be getting along all right although it is entirely different work than he has ever done.

I thought I had been able to get a girl to help in the office, and Italian girl from Southport, but after being there three days she left word Saturday morning that she could not keep the job as her mother had been taken sick and she had to stay home to take care of her. That leaves me up in the air again. It is almost impossible to get any kind of girl around here these days to do any kind of work, as the demand from the factories where high salaries are paid, cleans the market out pronto.

I do wish one of you boys would write me as we have heard nothing from Alaska since Dan left.

On Wednesday, a letter from a friend from Venezuela to Lad.

On Thursday and Friday, another letter from Grandpa to Ced and Dick in Alaska.