It is December, 1943. Grandpa is excited about the coming visit from son # 3, Ced, from far-off Anchorage, Alaska. Lad and Marian have been married for only a few weeks and Uncle Sam has a Christmas surprise waiting for them.

The lost has been found! Lad’s picture finally caught up with us at – of all places – the Hospitality Center. It had evidently been there for quite a while, but no one knew about it, ’cause it was put away in a drawer. And we haven’t been up there as much as we used to be either, so that probably accounts for the fact that I didn’t get it.

I’m so glad it finally got to me and I’m just as pleased and thrilled with it as I can be. It’s an awfully good picture of him, I think, and 100% better than the only one I have of him that was taken out here in his uniform. Thanks so much, Dad, for your thoughtfulness in sending it to me. His baby picture is darling, and he had light hair, too, didn’t he? I commented on that fact to Lad and he said, “Yes, I’ve been lightheaded all my life, too!” See whats happened to him? But he’s mighty nice to have around, nevertheless.

Received a letter from my sister yesterday saying that the pictures of the wedding have come back and that they’re very good. We are very anxious to see them, of course, and  are planning on having some of the Kodachrome slides developed into regular pictures. Will send them to you as soon as we get them developed. Wish you could see the movie films. Peg says they are very good too. 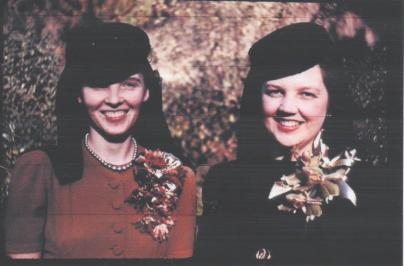 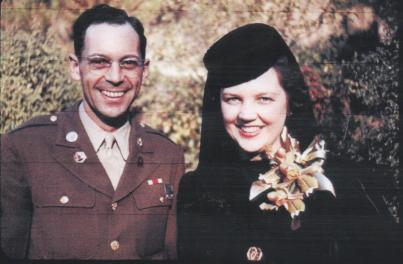 Al (Lad to family and friends) and Marian Guion

We’re hoping to get up to Orinda for Christmas but won’t be sure until the last minute whether or not we can make it. At any rate, Lad and I will enjoy our first Christmas together, and will be looking forward to the time when we can all be “Home for Christmas.”

This office stationery isn’t too good, but I knew you’d want to hear about the picture right away.

The next three days will have letters from Grandpa and I’ll finish out the week with another from Marian to The Guion Clan.