This section of the letter begins with a final request from Grandpa to Paulette for another letter. It ends with a condensed version of letters from Dave.

And if that new hubby of yours doesn’t write me an answer about the things your family would like to have, and which I would like to send from there American friend, just to show our happiness in having acquired a new daughter, just write me another letter yourself. Why not try something in English, just to get in practice, like Papa Senechal did and which I

thought was a very considerate and courteous thing for him to do. You ought not mind writing in English even if you make some mistakes. We would have no right to laugh at such mistakes knowing very well we could not do nearly so well if we tried to write you in French. (Then, too, we could write each other little secret notes which wouldn’t have to pass through the hands of the interpreter). And let me thank you right here and now for that very lovely letter. I wish you were here right now so I could tell you how much I appreciate it. You can’t get here soon enough to please me. Leave Dan behind if you have to and I’ll meet you at the dock with a French dictionary in one hand and a French flag draped around my waist so you won’t mistake me for the Statute of Liberty. I’d even go so far as to have our dog Smoky trimmed to look like a French poodle if that would help. I couldn’t promise to have any real Camembert cheese, of which I am very fond, on the table for your first meal, as we are able only to get the imitation over here, but I might get hold of a loaf of French bread and cook up some French fried potatoes. What other inducements can I hold out to hasten your departure. 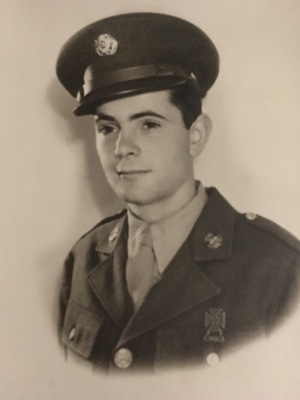 Dave, the old smoothie, has written me such a flattering birthday letter, that I feel like the old Irish woman at the wake of her husband, while the priest was extolling the virtues of the departed, said to her son, “Jimmy, look in the coffin and see if it’s your father who really is in there.” In fact, I am just too modest to quote it, so I’ll have to fall back on the old advertising gag and say “details furnished on request”. It’s nice to have you feel that way anyway Dave, and I suppose I can justly take some pride in being the father of a son like you.

I’ll have to condense Dave’s other letter a bit so as not to run over on a 5th, page. He says: Everyone seems to be here in Manila except MacArthur and a few of his boys, who left a couple of days ago for Tokyo. Some of the boys here saw MacArthur the day after he landed, standing on a balcony without his hat. They claim he’s bald. Perhaps that’s why we always see pictures of him with his hat on. Why I should mention this I don’t know— there’s certainly no crime in being bald. Ever since I got your letter quoting Dick’s, I have been trying to figure out what made Dick write to you. I think now I’ve got the answer. Jean was about to join him and he figured she would ball the daylights out of him for not writing you for so long, so to avoid any trouble, he wrote you a short note to clear himself. Some one of these days I’m going to write you a letter, Dick, to tell you what I really think of your correspondence in the past. You ask, “Will Dave stay in Okinawa?” You have the answer to that one now. Yes, I’ll be part of the Jap occupation in a roundabout sort of way. We don’t know but it looks as if we would sweat out the rest of my Army career in Manila. I’ll be home for Christmas, but it will be ’46, just as I predicted some time ago. I’m disappointed in Jean. I had a magazine I could have read during my plane ride to, but there was too much to see below, especially over land. Both Dan’s and Lad’s letters on the marriage were very interesting. It was nice to have had Lad there for the ceremony. It looks now as if your French daughter-in-law will soon be in America with her husband. The way I see it, with Dan’s 75  points, he should be home before Christmas.    Dave.

And now a couple of sneezes a piece for each of you, and a bleary but loving glance from your sniffling     DAD