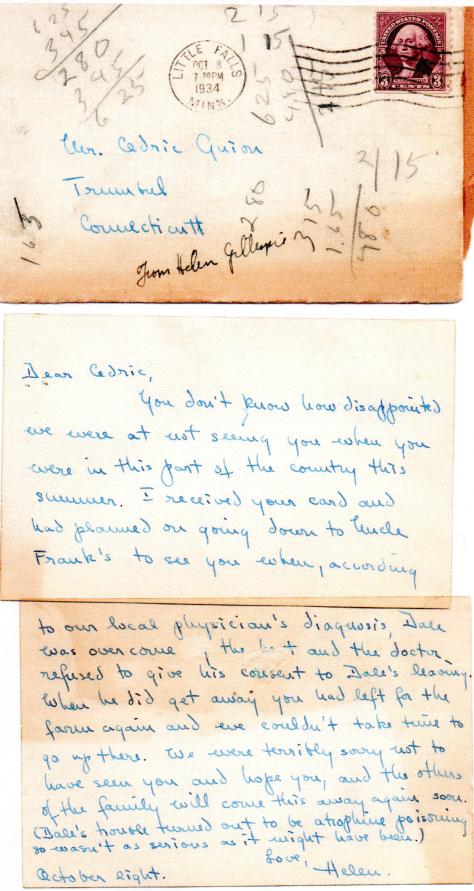 You don’t know how disappointed we were at not seeing you when you were in this part of the country this summer. I received your card and had planned on going down to Uncle Frank’s to see you when, according to our local physician’s diagnosis, Dale was overcome by the heat and the doctor refused to give his consent to Dale’s leaving. When we did get away you had left for the farm again and we couldn’t take time to go up there. We were terribly sorry not to have seen you and hope you, and the others of the family, will come this way again soon. (Dale’s trouble turned out to be atropine poisoning so wasn’t as serious as it might have been.)

This note was mailed in Little Falls, Minnesota. I’m not sure how Helen Gillespie is related to Franklin Peabody and when I get some extra time I will try to figure that out. She may have been his younger sister, Helen Sophia, but I need to do some more digging to confirm that. 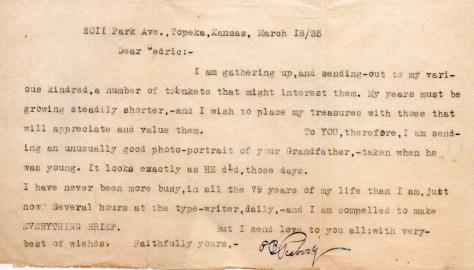 I am gathering up, and sending out to my various kindred, a number of trinkets that might interest them. My years must be growing steadily shorter, – and I wish to place my treasures with those that will appreciate and value them.

To YOU, therefore, I am sending an unusually good photo – portrait of your grandfather (Kemper Foster Peabody, Arla Peabody’s father), taken when he was young. It looks exactly as HE did, those days.

I have never been more busy, in all the 79 years of my life, than I am, just now. Several hours at the typewriter, daily, and I am compelled to make EVERYTHING BRIEF.

But I send love to you all: with my very best wishes,

And so we come to the end of Ced’s Coming of Age Adventure in September, 1934. Ced’s next adventure begins in 1940 when he and his older brother Dan, back from Venezuela for a year, leave Trumbull to travel to Anchorage, Alaska, where they hope to find jobs.

Tomorrow, I will begin posting letters written in 1942. Dan is already in the Army and Lad is expecting to be inducted in the next few months.