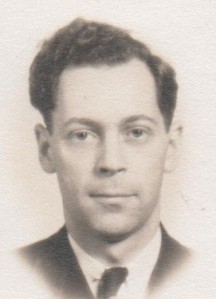 Just to show you how sore I am I am starting in to write a double spaced letter to you, but before long I shall probably repent and make up a lot of excuses for you and change to single space again. No letter again this week, which coupled with the fact I am still not feeling so hot physically, is doubly disappointing.

Yesterday and today Dan has chopped the three dead Locust trees down by the cottage. Mrs. Burr has finally decided to move in and fix the place up so that it will be livable, putting the rent money into repairs for a while.

Ced has been spending what spare time he has last week looking into the relative merits of various makes of cars in the $1000 class. So far he has been favorably impressed with the Nash, Studebaker and Buick. What would be your preference?

Rusty (Heurlin, family friend and painter, who went to Alaska and became quite famous for his paintings of Alaskan life) suddenly appeared on the scene late last night. He has been staying a couple of weeks with Sydney (Bagshaw) while Brita (his wife and Rusty’s sister) and the baby have been visiting Mama in Wakefield.

Today has been a beautiful sunshiny day, a little cool when not in the sun and quite a breeze blowing. I walked around a bit in the afternoon which I hope did some good. It seems to be some sort of sinus trouble but is very slow clearing up. Usually that means some infection somewhere like teeth or tonsils, but as far as I know I have no trouble in either place so it must be something else because I have not felt energized or really myself for a number of months. Maybe with the sunny days of spring rapidly approaching I will absorb more vitamin D and get back some pep.

The company check for the regular amount arrived last week and has been deposited as usual.

There is practically no news I can think of that would interest you. Ex-mayor Behrens of the Behren’s Market died last week, the lady in the dry-cleaning shop has had some trouble with her eye and had to wear a black patch last week. She said a cinder got in her eye and scraped the eyeball.

Rusty wants to be remembered to you.

I do hope I’ll get a letter from you soon because as far as I have heard the draft for $50 I sent you may have been lost in transit. I have never received the photos nor have I heard whether you changed your plans about visiting Trinidad for your Easter vacation. The night of your birthday when we were all gathered around the supper table in the kitchen we all concentrated on sending you a thought message of goodwill and best wishes which I hope you were tuned in to receive.

I’ll turn in now and think of you and maybe cuss you a time or two for neglecting your old dad for three weeks at a stretch, ending up with the hope that Kurtz (the Post Office is located in Kurtz’s Grocery Store) will be holding a letter from you when I stop in there tomorrow morning. To be fair I don’t suppose the kind of letters I have been sending you lately rate as letters at all. The only thing you can say for them is that at least you have heard from us regularly.

Tomorrow and Sunday, I will post more of Elizabeth’s Adventure in St. Petersburg, Florida.