The big News this week is the telegram I got from Dan Thursday telling me his 10-day furlough had just been granted and to wire him 20 smackers so that he could pay his fare home. He arrived Friday about supper time but alas, having eaten something that did not digest so well along with hot weather, lack of sleep etc., he felt rather low upon arrival, but after heaving up what remained of the causus “belli” and getting some sleep, he attained his pristine condition and has since been luxuriating in doing just what he darned pleases to do whenever and wherever the fancy strikes him. No high-pressure parties or exciting doings such as you see described in LIFE as the typical doughboy on leave doin’s, but all that is necessary  to satisfy him. He has to be back by reveille July 4th and there is just a bare possibility I may be able to arrange things so that I can go back with him, stopping at Aberdeen enroute to check up on my other soldier. Of course what I should like to do would be to make this trip via Anchorage and drop in on my pilot son and find out why he doesn’t write a bit more frequently, but until they get that road finished I guess I’ll have to forgo that pleasure. Dan says he has come to place little credence on the many rumors that continually float around as to where his unit might be sent, but one which he hopes will materialize is a report they might be sent to Alaska to do some mapping work.

Dick took his physical at Shelton Tuesday and apparently the doctor found no reason why he should not be acceptable to his Uncle Sammy, so I suppose before long, I shall be driving my third boy up to the Derby railroad station. Apparently I’m supposed to keep this up indefinitely.

As for your requests, Lad old bean, don’t you know one way to make me happy is to give me something to do for any of you boys. I only regret in true Nathan Hale style that I can do so little. Perhaps I will bring down with me what you want in the way of boxes, watch and coat hangers. If I don’t go I’ll mail them to you. On the battery, I called up Remington Rand and they told me they did not handle these anymore but did give me the name of a concern in the west to whom I immediately wrote for information, prices, but have not yet had a reply. I was a bit puzzled on the razor matter. You asked if we had one we could spare. I could not dope out whether you meant a dry shaver or a safety razor. If the former and you did not have a battery I could not see how that would help it, if the latter, you said the Army had furnished you with a Gillette, so I’m kinder up a tree on that one.

Aunt Betty says: “Give my love to the boys and tell them I think of them often even though I don’t say anything.”

For your information, Ced, Lad is out of the hospital. His stay was brief and on return to duty he was transferred to Co. D, 8th Bn. for his second period of training. It lasts 8 weeks and he will not be able to get leave until sometime after the middle of July. He is now being trained for a non-com rating and instructorship which means a pretty heavy schedule from _ A.M. to 8 P.M.

And Lad, I have been intending in every letter to tell you that the Gladstone bag with your clothes in it arrived safely. I had the soiled things washed and put away and your woolen outerwear hung in my moth proofed closet.

This penny postcard from Lad to his father, Grandpa, was written on June 30, 1942, and post marked July 1, 1942. It was sent to Grandpa’s business address in Bridgeport, probably because mail sent there would be delivered sooner. Notice there is no zip code. Penny postcards really did exist. 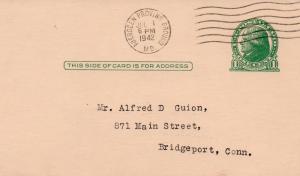 I am trying to put 4 years of teacher training into my head in 6 days__!  Wow!!! I shouldn’t even be taking this time, but I have 10 minutes between classes for a smoke and instead of writing my lessons, I’m trying to tell you that this is the longest “letter” you will get this week. I spent Sunday in a little preparatory reading and didn’t write at all. I got your letter this noon and sincerely hope you can find time to make a stop in Aberdeen. However, I would not be able to see you if you come before Friday, I’m afraid. Also, there is a rumor that there may be a parade in Balto (Baltimore). Saturday, and if so, I may have to go. If so, why not wait here for me to return? Anyhow – here’s hoping. I don’t remember if I mentioned the receipt of the $5.00. Anyhow I got it. Thanks. See you soon, and there goes the whistle – Lad

Tomorrow I will begin posting a three-part letter from Grandpa to his sons, which will finish out the week.